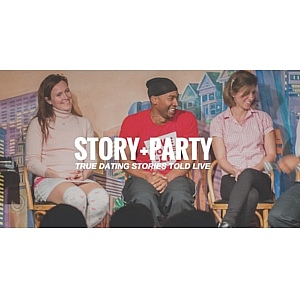 Story Party is an event where you'll hear courageous storytellers talk about a time they got played, made, or just tangled up in that love stuff. The show runs approximately one hour followed by a chance to laugh and drink some more.

Story Party is an award winning "Tinder Alternative" San Francisco production with drinks, people to meet, and true dating stories told to a beat.  Story Party is in town for one night only. So don't miss the chance to see the exciting show.

Q. Can I come alone?
A. Yes, but leave with someone.

About the creator of Story Party, Rachmaninov Blake:

Rachman Blake (USA) is a comedian, writer, storyteller, filmmaker and world traveler who will make you laugh at things you never thought you would. A lover of languages, he's performed in French, Spanish, German, Norwegian, and bad English. He’s played in over twenty countries, seventy cities, and at comedy festivals all over the globe including Edinburgh Fringe, Adelaide Fringe, San Francisco, Austin, San Diego, and New York Comedy festivals.