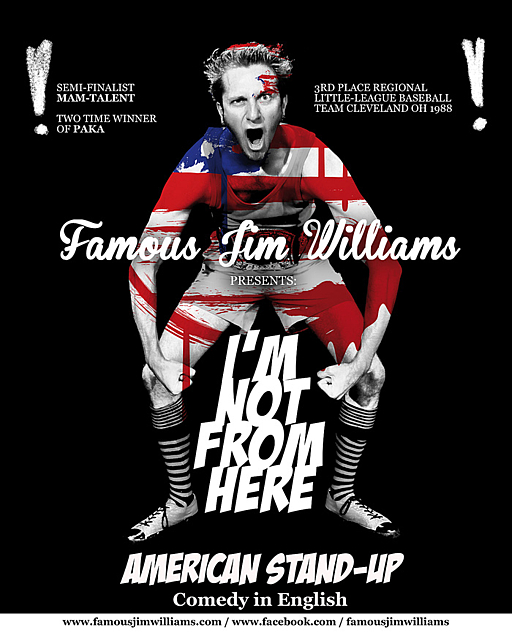 After living in Poland for 6 years, the award winning physical comedy mastermind behind Liquidmime can no longer stay silent.

Famous Jim Williams presents "I'm Not From Here", a collection of hilarious and biting observations about Polish reality and being an American abroad. From attempting to stay sane while adapting to Polish culture, to running from the invasive American culture that follows him wherever he goes, the two time PAKA winner and Mam Talent semi-finalist dives headfirst into stand-up comedy to bring you an energy-packed performance of spoken word combined with physical virtuosity. Special Guest opening act, Derrek Carriveau!

Jim Williams is an American performing artist who lives in Poland and has performed across the U.S. and Europe. Born on the same day as Buster Keaton, Jim grew up on a steady diet of American cartoons. He discovered mime when he was 15 and later began studying theater and dance to help him towards his ultimate goal of becoming a human cartoon. At age 21, Jim began performing internationally. Over the years Jim has developed his own unique brand of performance through working with groups such as KAPOOT (Chicago, IL, USA), The Big Apple Circus Clown Care Unit (Chicago, IL, USA), Interkunst (Berlin, Germany), and his own creation Liquidmime.